A Visit with Great-Grandma

Several weeks ago, we went to see Great-Grandma. John loves Great-Grandma and all her toys! She has a box of little wind-up toys and lots of beanie babies. One time she gave John a grey cat beanie baby. He named it "Great-Grandma's mey-mey" (cat). We had a nice visit at her place and then went out to dinner with my Aunt Karen and her girls. John was quite the charmer with my cousins and kept chanting "Molly is my favorite" over and over. Hopefully we will get to see everyone again soon for Easter. 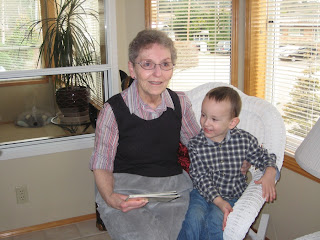 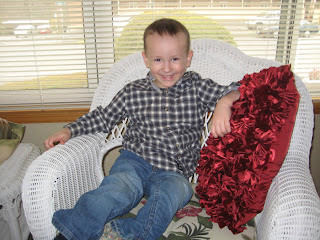 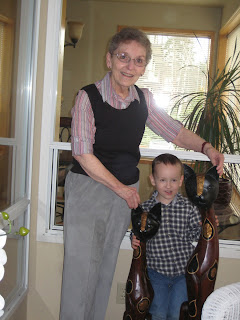 Posted by Lindsey at 9:21 AM No comments:

I was doing dishes, Peter was in his bouncy chair and John was hovering over him...
John: I hugged Peter!
Me: You are such a good brother.
John: I'm a good kisser!
---
Me singing while serving up dinner: ♫ Do you like piña coladas and getting caught in the rain ♪
I bring John his quesadilla...
John in a really grumpy voice: I don't want that I want a piña colada!
---
Me: Are you going to go play with Peter?
John: Yeah, I'll be really gentle!
Me (feeling touched and proud): Awe, you're so nice! How did you get to be such a nice boy?
John: And I won't break his head! That would be an ouchie!
---
John: Peter rolled over. He's having tummy time!
Me: Go encourage him - tell him he's a big boy!
John crouching down and using "motherese": Peter, you're a big boy!
Peter coughs...
John: Cover your mouth, Peter.
---
Shortly after Christmas I showed John The Many Adventures of Winnie the Pooh, which is a movie I fondly remember from my childhood. Now he likes to randomly throw things up in the air and says:
"Hip-hip-a-bay!" (Hip-hip-hooray!). It's cute =)
---
Cute pronunciations:

Last Lent (2011) we gave up TV, including John. I didn't think it was going to be that hard, but it made me realize how much I was letting John watch TV during the day. He usually watched a half hour show during the day, which is probably less than average. It was a nice break for me and he enjoyed that TV time. He would usually watch an episode of Blues Clues, Kipper, Thomas the Train, or Dragon Tails. I didn't see any harm in it... until we gave it up.

During the first week of those forty days, John would get really crabby because he wanted to watch a show and I realized that I had been using that TV time to get things done. Essentially, it was babysitting John for me - something I vowed would not happen when I became a parent. But it's such an easy thing to get in the habit of! It turned out to be a great Lent and my eyes were opened to see that I can get things done without having the TV on for John. After Lent was over, we started watching shows again, but it's different now. He typically watches TV once a week and it is now a family time, where we all watch it together (minus Peter of course!).

If you are a parent who wants to reduce the amount of TV your children watch and still have time to get things done, here are some tips that helped us make the transition:

--- 1 ---
Set up Play-Doh or another craft that isn't too messy at your kitchen table. When he was younger, I would put John in his highchair to contain him and the mess. This works well when I am making dinner.


--- 2 ---
When your children are playing alone, use your time wisely to get important things done - this could be anything from relaxing to scrubbing the toilet - whatever is most important to you! In my experience, if I am deliberate about what I do in my "free-time", there is plenty of time to get things done without having to use the TV as a babysitter.

--- 3 ---
Audio books can be a great alternative to TV because they are entertaining, don't require parental involvement and still utilize your child's imagination. We have Strega Nona on CD, read by the author, and John LOVES it! Be sure to check out the audio book section at your library!

--- 4 ---
Keep your kitchen sink clean and empty so you can pull up a chair and have your child play in the water with some plastic toys (another good activity during dinner prep). I put a towel on the chair to make it less slippery and use it to clean up any spills after playtime.


Check out this post for ways kids can help in the kitchen at every age.


Do you have any other ideas? I'm always looking for new things to try!
Posted by Lindsey at 3:06 PM 4 comments:

I was singing a song to John and one of the lines was: "I had a heart forever true, but it left me and went to you. So guard it well as I have done, cause you have two and I have none."
The following conversation ensued:
John: Where's your heart?
Me: You have my heart!
John: It's not in my hands.
Me: Where did you put it?
John: I put it next to the goat shed.
----
At the table eating lunch, John coughed while drinking apple juice:
John: It went down my wrong way.
Me: It went down the wrong way?
John: Yeah, and in my bottom. It made poop for me!
(Where does he come up with this stuff??)
----
John picked up an empty beer bottle from Andrew's home brew crates:
John: Beer bottle!
Me: You don't drink beer, you're a kid!
John: I'm a beer guy!
Posted by Lindsey at 2:33 PM 1 comment:

I've toyed around with a few different applications on my phone for grocery shopping. Andrew suggested I try Grocery IQ. He found out about it through Life Hacker. I decided to give it a go.
It is SO wonderful!  Here are some of my favorite features:


There are many other features, but I appreciate those the most. The downside to having your grocery list on your phone is you are staring at your phone the whole time you shop. I just think that looks bad and that people think I'm neglecting my kids. But I guess it's no different than staring at a paper grocery list.

What do you use for your grocery list?
Posted by Lindsey at 3:32 PM No comments:

Peter is not quite 5 months old and he has reached another milestone! He rolled over for the first time today - totally unassisted. It seemed very easy for him, so we know he has been capable for a while. We even caught it on video: 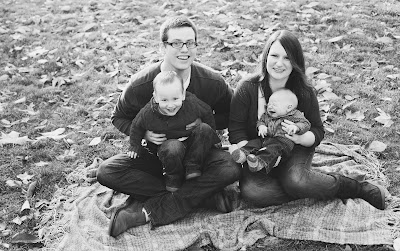 When we went up to Bellingham for Thanksgiving, we arranged to have some family pictures taken professionally by Jewels Harrell. She is a fantastic photographer who also took our engagement pictures back in 2008. 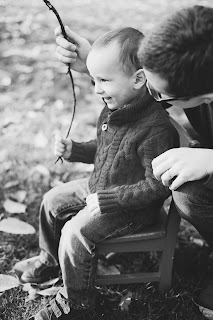 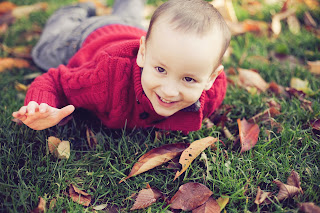 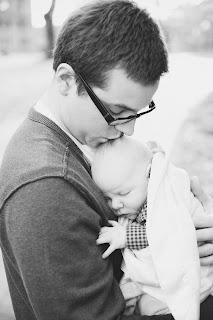 It took us awhile to get around to it, but we finally made an album featuring our favorite pictures from the photo shoot. We are excited to get it in the mail pretty soon! Here is a preview:

We've been buying Bountiful Baskets for a couple of months now - and loving it! We participate every two weeks. Here is what we got today for $16.50 : 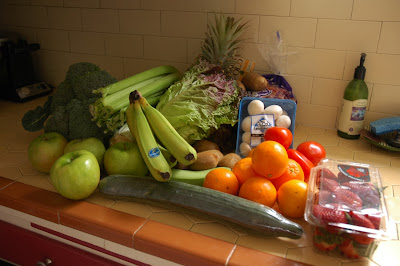 You never know what you're going to get, which is kind of fun. It's like Christmas!! But it's always half veggies and half fruit. This week the contents were: