When we originally looked at this house to rent back in late June, we had a full tour of the house. As the landlord and I approached the basement door (only accessible from outside) I noticed a thick trail of ants along the side of the house. "Huh..." I thought to myself. Apparently this house was already occupied. I shrugged it off, however, as I'd dealt with these kind of ants in the past with no problem. In the first house I lived in after I'd moved out of my parents' house, we had a sugar ant problem that was resolved in a matter of days. The house was too good of a deal for us to pass up over a few ants.
During July, I moved the majority of my belongings into the house and began living here before Lindsey and I were to be married in August. Every now and then, I'd spot an ant or two on the ground in the bedroom. I thought little of it. My to-do list included getting rid of the ant trail near the basement door, which I figured would take care of the problem.
The weekend before the wedding, Lindsey and I went to Bellingham to have our bachelor/bachelorette parties with friends, but right before we left, I discovered a swarm of ants at the base of the refridgerator, gobbling up some crumbs that messy-me had left on the floor.
"That's it," I thought, "I'm taking care of this right now." I grabbed my wallet and walked to Safeway (half a block from our house) determined to get rid of these stinking ants. I found a bait, similar to what I had used at my previous house, which had worked flawlessly before. I set them up around the house thinking all would be better when we got back from Bellingham on Sunday. Little did I know, this was just the beginning!
When we got back, I eagerly went to the house expecting to see the ants gone, only to find they had moved from the kitchen floor to the kitchen counter. Grrrrr. 5 lousy dollars down the drain, for bait these ants simply weren't wasting their time with. After a search on Google, the next day it was off to Lowes to find the top rated bait.
This stuff seemed to work. The ants were eating it up, and couldn't get enough of it. "Hah hah, ants -- the joke's on you!" The kitchen counter was relatively free of ants except the corner where I'd set up their feeding troff for the bait. Any ants that ventured off to explore the rest of the kitchen were doomed to meet my crushing finger. 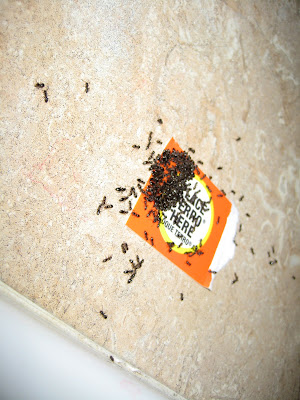 A week later the ants were still eating up the bait, which I kept replenishing. The bait said to give it two weeks. By this time Lindsey and I had just gotten married and little could deter our attention away from each other and the joy we were experiencing as newlyweds. I insisted Lindsey be patient with my ant exterminating project, as we left for our honeymoon to the Columbia River Gorge.
When we got back, the little buggars were ready for a refill. The two weeks for this bait were almost up and it seemed to have little to no impact on the ants. If anything, we were just feeding them and helping them to multiply and occupy our kitchen. Our tolerance for these guests was wearing thin.
Next, I called the landlord to have an exterminator come. The next day they dropped off a chemical spray which required all food be covered, and you leave the house for two hours after fumigating. This stuff was too powerful to not work. The same day I had discovered the ants had invaded the food cupboard and were bathing in pancake sryup around the lid. I lost my temper and it was time to fumigate. When we got back, the house was cleared of ants, and for once there was a glimmer of hope. The next night, while Lindsey and I were playing Acey-doucey on the bed, we noticed some ants on the ceiling coming out of the light fixture. We couldn't win!
A couple days later, after commenting to Lindsey how the ants had seemed to be subsiding, she later yelled at me while I was in the bathroom that they were swarming on the kitchen counter again.
I think we've since given into accepting the ants, and are through exposing our kitchen to any more chemicals. They show up just about everywhere. In the bed, on my face, in Lindsey's hair, etc. Our current policy is "seek and destroy." I regularly check the spots where ants have been and crush them with my finger. Lindsey, although more reluctant to killing things, has begun doing the same. Dymphna, unfortunately, only eats the ants if they're already dead.
For now, I will continue having nightmares similar to this movie trailer: