I have been keeping an eye out for ways to integrate more formal learning for John during the day. I do realize that he is learning all.the.time and soaking up everything we say and do together. However, I want to make sure I am giving him some tools to begin a foundation for formal schooling - especially since he is interested in it.

For Christmas, Uncle Aaron bought John the Letter Factory from Leap Frog. I put it on John's wish list because it was mentioned in this great post I read on learning to read written by a homeschooling mother. John has been watching it probably once every other week, on average, and loves it! He also has learned most of his letter sounds by watching it and being quizzed with flash cards. He knows we are proud of him and so he is very proud of himself.

Several weeks ago I began reading a book called Mommy, Teach Me to Read. It is loaded with good ideas and I highly recommend it!  I've already implemented some of the author's recommendations for teaching letters. I bought some magnetic letters and I let John just play with them when he wants. However, we do put them away after he is done with them because I want them to be a special toy and I don't want to lose any of them!! In a little while, I will use them for more formal teaching, but for now, he loves playing with them and making "words" with them. He lines them up on the fridge and makes the letter sounds. It's an especially great activity for him while I'm making dinner! ;) I started taking pictures of his words and telling him how proud I am of him. In the pictures below, you can see the progression of his own pride. At first he was uneasy about me taking a picture, but now he runs to me and asks me to take his picture with his words. Very cute! 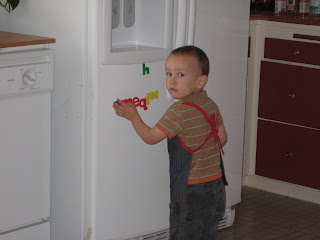 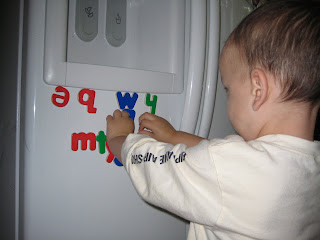 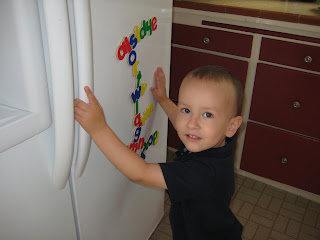 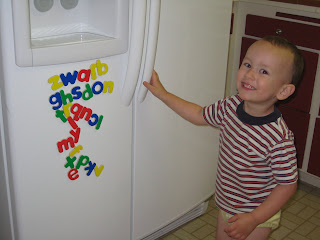