This morning was rough. John use to stay in his bed and yell, "Open door please, Mama!" Until I relented and rolled myself out of bed to open his door. I think he did this because he was afraid to get out of bed. Well now we have entered a new phase of independence. I even tried to open his door once this week and he told me to "let Johnny do it." With this new independence also comes earlier wake up calls because he gets up the instant he is awake. Yesterday he was bright and chipper at 6:15am and today he let me sleep in until 7:15am. I'm generally accustomed to sleeping in until 8am - spoiled, I know!

But this morning he was up and not so chipper. I told him that I would send him back to bed if he was going to be so crabby. Once we got to the living room and started playing with toys he was better. But I was still finding myself annoyed by little things.

I was making sandwich bread and he wanted to help put the salt in. I let him do it, but tried to guide his hand. He wanted to do it on his own and sure enough - he dumped the salt on the counter right next to the mixing bowl. I know it's not big deal, but I've noticed he wants to be independent when he really still needs help, and dependent when he doesn't really need help (i.e. wanting me to pick up his toys for him).

Anyway, I was feeling very negative with all these little things. But once the bread was in the oven and the kitchen was clean, I went into the living room to be with my little guy. I really do love him. He has such a great imagination - acting out voices for his stuffed animals and little figurines. He also loves to read. He could be read to all day if I was willing. His bookshelf is in constant disarray because he is always pulling books out to read.

Today he found a book by Peter Yarrow that is full of lullaby lyrics and beautiful pictures. Attached to the inside cover is a CD with all the songs. We got it as a baby shower gift before John was born and we've never listened to the CD. I asked John if he wanted to listen to it with me. He said yes. So we busted it out of it's untouched case and put it in the CD player. It was a great album. I really like Peter Yarrow's voice. We sat on the couch and I sang along with the songs.

When Puff the Magic Dragon came on, I was surprised by my reaction near the end of the song:


A dragon lives forever but not so little boys
Painted wings and giant rings make way for other toys.
One grey night it happened, Jackie paper came no more
And puff that mighty dragon, he ceased his fearless roar.

John was surprised too. He is always so concerned when I cry. "Cuddle Mama," he said as he came over and hugged me.

It's so easy to get caught up in the day-to-day. Picking up toys constantly, repeating yourself over and over, dealing with crabbiness, picky eating, being pulled out of bed at who-knows-what-hour... I instantly felt so bad for feeling irritated earlier. My little boy will not be little forever. This precious time I have with him is so fleeting and I resolve to value it more. Who knew good ol' Puff would bring me to my senses... for today. 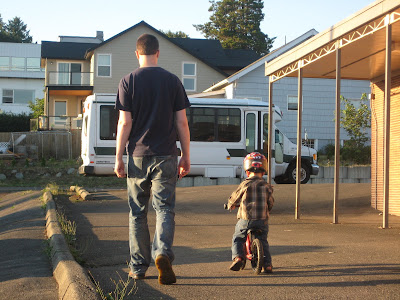