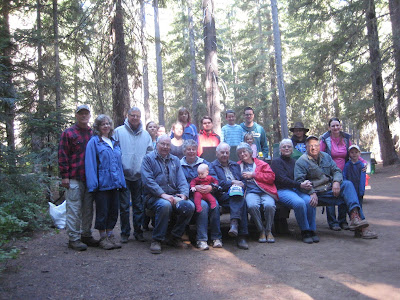 We just got back from our annual Huckleberry Picking trip. Out in the berry fields this year, I got to hear Andrew's dad (Dad) share a little backstory about this long-standing St.Hilaire tradition. My poor memory can't recall all the details, but here are the nuts and bolts I retained: back in the late 1920s, 1927 as I recall, his parents, Grandma and Grandpa St.Hilaire, went to Mt. Adams to pick huckleberries. This was prior to their marriage so of course, they slept in separate tents! The depression hit and Dad said nobody really traveled anywhere during that time and just focused on day to day survival. Frivolous camping trips for huckleberries were out of the question. It wasn't until later in the 50s when their mail man mentioned going to pick huckleberries that Grandpa decided he wanted to go again and take the kids on a day trip to pick berries. They headed up after Mass one Sunday. On the way there, they ran out of gas and had to flag down another car. The fellow who stopped didn't have extra gas, but did have a full tank and was willing to share with them if they could get it out. Apparently in their car, there was a strap behind the driver seat for the back seat passengers to hold onto when the road got bumpy, and the strap was cased in a tube of sorts. So Grandpa removed this tube and used it to syphon gas out of the other gentleman's car. Of course, in order to get the gas going through the tube, Grandpa had to suck the gas until it began flowing. Once it came through the tube, he spat it out and declared, "Ah, that's the best gas I've ever tasted." They made it up the mountain, picked berries, and headed back home. On the way back, they even had a flat tire to tend to - and this was all on one day trip! Dad said he didn't remember what they even made with the huckleberries. He supposed there was pie - it must have been something tasty to bring them back year after year. They went picking off and on throughout his childhood. And tradition continued when he and his siblings were all grown and had families of their own. 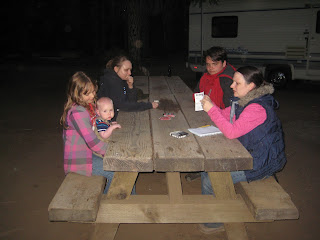 When I entered the scene in 2005, huckleberry picking was a longstanding tradition. It was so special, that I wasn't allowed to go until after we were married. We were married in August of 2008, and as our honeymoon, we did some camping on our own and then ended the trip at Mt. Adams in the huckleberry fields with Andrew's family. The family attendance that year was low because everyone had just traveled to be at our weddings - but Andrew's parent's were there, along with Lou and Jenna, Terry and Christina + their kids, and Uncle Dick and Aunt Louise. I love that our honeymoon included this tradition - I had finally earned my right to attend! No way, I was going to pass that up! And since 2008, there has only been one year that we've missed. 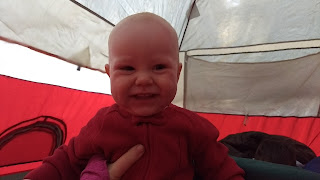 As you can imagine, with all the years that the family has been going, there are so many stories to tell! There are family-famous stories I've heard, like when Andrew, cousins Maria, and Katie, got lost in the woods trying to find a frog pond... and first-hand stories that I was part of - like the year we only found one - ONLY ONE - berry!

This tradition builds our family culture. These camping trips are the fuel for the stories my children will tell. 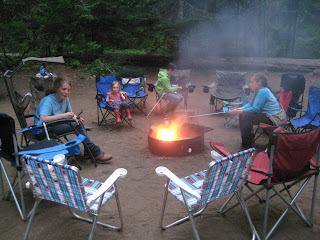 This morning we are experiencing a "camping-hangover", complete with dirty, smokey clothes waiting to be washed, the garage full of all the camping gear, the cooler empty save for the ice blocks, still slowly melting. 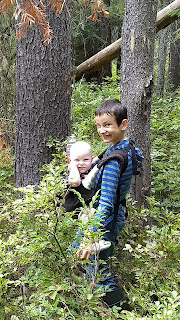 As I washed and measured the berries just an hour ago, I was thinking of all these stories with a smile. Traditions like this are just so special. John helped me wash the berries and I knew in my heart, he will carry it on. I'm sure the others will too, but he is getting old enough to hold these moments as sacred. He did a lot of picking this year and to honor that, I let him label a bag as "John's berries - 2017". Later, I will show him how to make a pie and we'll share it with some special friends. Because that's what we do - the camping lasts only 2 days, but the berries last all year, sometimes longer (we're pretty stingy with our berries!), waiting patiently in the freezer for a special occasion. John knows what goes into a pie. It takes a long time to pick a pies-worth of berries. He knows when we make a pie, there better be no berries left on anyone's plate! That's a cardinal St.Hilaire rule... deeply instilled in us by Grandpa St.Hilaire. Today as John helped cleaned the berries, one fell in the sink and John *gasped* and quickly retrieved it. Yes, he knows. The berries are valuable, but truthfully it's the family. That's what the berries symbolize.  He'll take his kids picking. I'd bet money on it. And he'll share these stories and his memories. 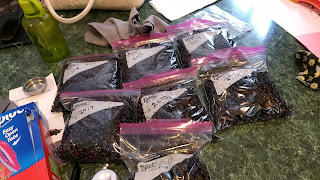 I feel a little bad, like I'm bragging about this tradition that began about 90 years ago. Most people don't have things like this to be a part of. So please don't take this as bragging, my hope is to encourage. Hold fast to your family traditions, whatever they are. If you don't have any - start some! And if you do start your own, maybe 90 years from now, in the year 2107, your descendants will be talking about your stories and adventures with their own children.

PS. For the record - we got 7 pies this year, including John's.