It has been a long time since I've done quick takes... but I think it will be a nice way to catch up with the current events around here.

1. Visitors: A few weeks ago, we enjoyed hosting our sister, Christina, her mother, Liz, and Mom and Dad St.Hilaire. This was my first time meeting Liz and I have not seen Christina since our wedding. Their visit came as a surprise, but we were quite delighted! I had a lot of fun cooking and baking for them. One morning I made scones and decided to dig out my tea set from our stored boxes in the basement. I have never actually used the tea set, and this was the perfect occasion! I've always thought it would be nice to have a sister, and I am so glad I have gained five through our marriage! =) They brought a movie for us to watch called Sophie Scholl. It was very inspiring and I highly recommend it! Here are some pictures from their visit: 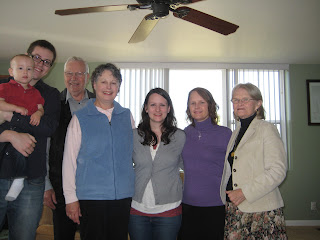 2. Jury duty: This week was very busy for me! I was called in for jury duty on Monday for the Federal Court in Tacoma and was selected to be on the jury for a criminal case. I was hoping not to be picked and told the judge that it would be an inconvenience - but so did everyone else who was there. I had a gut feeling that I was going to be picked - especially when I realized that I was the only one representing my demographic (young-stay-at-home-mom). It was a very awesome and daunting responsibility to serve on the jury. We deliberated about all the evidence for around eight hours - over the course of two days. During our deliberation I realized that we were the most powerful people in that courtroom. The lawyers present the case, the judge oversees the trial and gives the sentence - but the jury alone has the power to decide if a person is guilty or not guilty. We found the defendant guilty on 3 of the 5 charges; however, just as the famous juror in the movie 12 Angry Men, I was able to convince 10 of my fellow jurors that we could not prove guilt for one of the charges. If I had not spoken up, he would have been charged with 4 of the 5! The whole process was very fascinating and I'm glad I had the experience.

3. Rash Remedy: John has had pretty bad diaper rashes recently. But we finally found the remedy! I told my friend about the rash and explained that it was really wearing down his skin and the diaper cream didn't seem to do anything. In fact, the cream hardly stuck to the area because the skin was so raw (ouch!). She suggested that I use Athlete's foot cream because it is an anti-fungal cream and it sounded like he was having a bacteria problem. She told me to look for a cream that had the active ingredient called "clotrimazole". I found some and we tried it - sure enough, within a few days his skin was healed! Who knew athlete's foot cream would cure diaper rash too!!

4. Mothers' Group: Last year I was helping with our Mothers' Group at Star. I was in charge of leading the prayer part of our meetings. In mid-September, I found out that the leader is moving in December and she asked me to take over her role as well. It has been quite a challenge and I won't go into all the details, but I know it will work out. My goal is to divide up all the planning and teaching so that I don't get overwhelmed.

5. Update on Andrew: He has been working a lot this year (6 days a week)! Recently, for Star of the Sea, he designed a billboard to promote the Catholics Come Home campaign which will be during Advent this year. The billboard can be seen on a very busy road here in Bremerton. On the billboard there is a website listed that Andrew also designed: bremertoncatholic.com . I am always so amazed by his talent! He has also been working hard for Swingsetmall.com! John and I are proud of his daddy, but we are looking forward to having him home on Saturdays again!

6. Christmas: I know it is a little early - but I am very excited for Christmas! I think having a little one brings back all the fun of a childhood Christmas.

7.Getting his groove on! Little Johnny love to dance! He has a certain move that he does a lot and it is SO cute! I've been trying to capture this move, but whenever I pull out the camera he usually stops doing it. Here is the best video so far. We like to listen to kids music on the TV and here he is dancing to the Wiggles theme song. Enjoy!