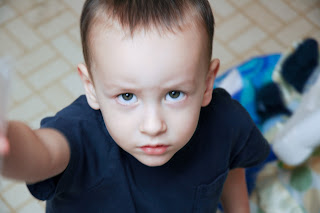 There is never a dull moment around this house. John is quite the talker and has a great sense of humor. Here are some quotes that I managed to write down over the last month or so:

His critique of some homemade grape juice: "It's not sour, Mamma. It's very spicy!"

When Peter was crying: "Oh, Peter, you're fake crying."

After trying to use the potty chair: "I put a toot in there! Come see!"

I was wearing a knit hat and John said, "I like your hat, it's really purple."

We were taking a walk and a sports car went by. The driver was revving his engine. After it passed, John said, "That car stinks!"

He gets to have a little cup of chocolate milk before nap and bed time. While he is drinking it he always puts his finger in his belly button. He calls this "belly button time".


Apparently I call Andrew "darling" a lot because John asked me one day, "darling had to go to work?"

When we were driving past a sign for a highway he said "That man lost his body" (In reference to the profile of George Washington).