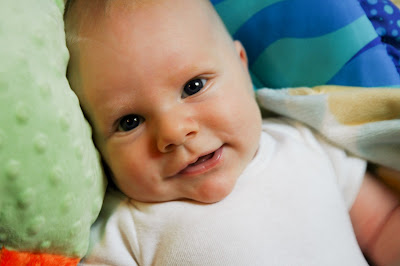 Our little Peter is almost two months old! It's hard to believe how quickly the months have passed, but we can't imagine life without him! He smiles a lot and is starting to coo and babble. He is a very cozy guy and I love co-sleeping with him. He is also a great sleeper - only waking up once or twice to nurse!

We noticed early on that he tends to lean his head and look to the right. We learned from a chiropractor who was a guest at one of our Bradley classes that this can be a sign of spinal misalignment, which likely occurred during delivery. So last week I took him to that same chiropractor and she determined that his occipital bone was misaligned. She made some adjustments and showed me some exercises to do with him. We had another appointment with her today and she saw major improvements in his neck strength and movement. Andrew and I have also noticed a lot of improvements. It's so nice to see him holding his head straight!

I have a couple more posts that I meant to write after Peter was born. I've been pretty behind on this blog for two main reasons (John and Peter!). Hopefully I will catch up soon!