Warning: Extremely cute pictures!!
1. Organizing: Last week I worked on organizing all of our junk in the garage. We tried to get it done by the time my parents came home from their week long trip to Oregon. We almost did it, but I have a little more to do.

2. Visit to Bellingham: We went up to Bellingham last weekend. It was jam-packed with good visiting. We had dinner with my Grandma on the way up, dinner on Saturday with Mom, Dad, Lou, Jenna, Cousin Erin, Bill, Sydney, Uncle Pat, and Francine (an honorary Grandma), we also visited with Fr. Qui-Thac, and we spent time with our good friends Katelyn, Jon, and Oliver Ralston! It was so great to see everyone!

3. Synonyms for weird: I realized that I say "weird" a lot. In fact, I think it has become a problem. Now that I recognize it, I notice myself almost saying it a lot. Most commonly, I relate thoughts by beginning with, "It's weird because..." So in order to help myself, here are some synonyms for "weird" that I might try using: strange, bizarre, peculiar, unusual. I know everyone has their words and phrases that they tend to say a lot. It's peculiar because the word I use all the time is "weird." Very strange, indeed!

4. John: Just a few days ago, John started getting up on his knees during tummy time. For a while he has been able to lift his chest off the ground. Now he just needs to learn to do these two things together! Then he will be a crawling machine!! It's bizarre being with him every day and not noticing all his little advancements - then when someone sees him who hasn't in a while, they tell me about how much he has changed!

5. The Front Lines: Yesterday I was at the 40 Days For Life vigil for two hours. I was nursing John while waiting for the next person to show up. The next person came and brought some graphic abortion signs. I am fine with these signs, though I typically shy away from holding them - not because I think they are inappropriate or wrong, but because my pride gets hurt when I am yelled at. Anyway, I was nursing John and these signs were right next to us. A woman drove by and yelled out her window, "You should be ashamed of yourself!!" I don't really get her logic. Why should I be ashamed of myself? Because of the pictures? I think the pictures are pretty shameful, but that has nothing to do with me. On a similar note, when John and I were protesting with Andrew, someone told us that they felt sorry for our child. Andrew responded, "At least he's alive." So true.

6. Moment of honesty: I am still working on thank you cards from the baby showers that were, um, *cough* six *cough* months ago. I feel terrible! I did a bunch this week, but I am no where near finished. If you gave us a gift and have not received a appreciative note yet, don't worry! This is going to be my priority over the next week.

7. And now for the cute pictures: 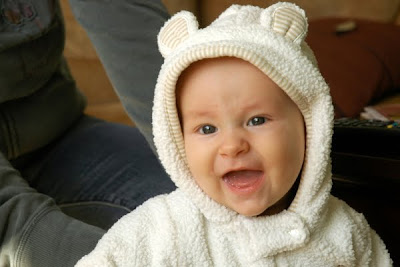 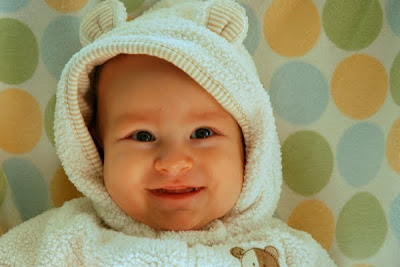 Thanks Cousin Hilary for the hand-me-downs!
Posted by Lindsey at 11:02 AM