John is my sweet, pouty, imaginative, know-it-all, sensitive, strong-willed, friendly, clingy, compassionate, moody, honest, loving almost-three-year-old. This morning he got up at about 7:20am and immediately wanted me to fix his little airplane that hangs from the ceiling in his bedroom. Whenever I hear John's door open I always quickly (slowly and carefully) get out of bed because I am afraid that John will come up in our bed and wake up Peter. Don't get me wrong, I'd love to snuggle up with John, but let's just say he is very squirmy when he snuggles.

I whispered to John that we will fix the airplane after Daddy and Peter wake up. He instantly dropped to the floor as though my words pierced his heart. I went to the bathroom and he sneakily climbed in our bed. Picking him up ever-so-gently, we went into the living room where he announced to me that me that he no longer loved me and my hair smelled bad (pretty sure he was smelling my morning breath...). How do you respond to a blow like that? I simply told him that he hurt my feelings and made me very sad. About two minutes later he hugged me and said "I DO love you!" 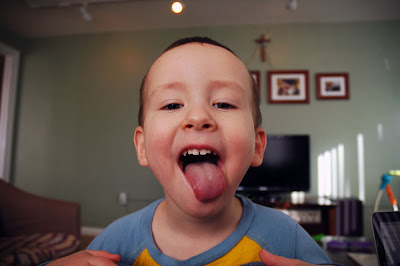 That is life when you live with a pre-schooler... all these emotional ups and downs all day long. Sometimes he says the sweetest things and then he'll turn around and defiantly say "NO" when I ask him to do something. It pulls on my heart strings, and I wouldn't trade him or this time with him for anything in the world. 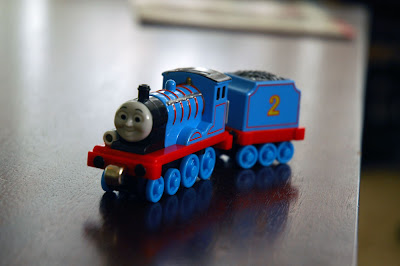 Currently one of John's favorite toys. This thing has chugged miles around our house! 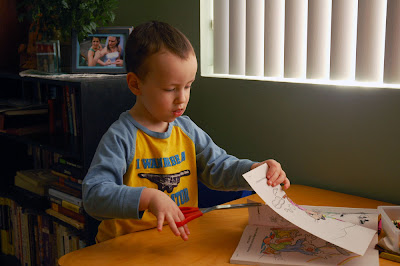 He stole my scissors for this cutting session, but he is getting pretty good with his small safety scissors! He is also very interested in puzzles. I'm amazed at his spatial skills. 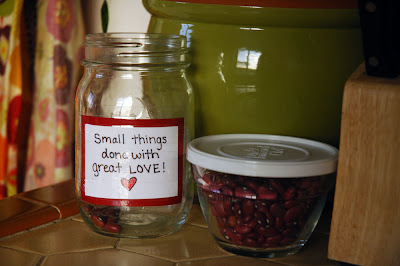 I found this idea to do with John during Lent. It's a bean jar. Every time he does something good, he gets to put a bean in the jar. On Easter the beans turn into jelly beans. However, at his age, we are going to turn the beans to jelly beans on Sundays. Also for Lent, I'm hoping to get him to make the sign of the cross. He says the words but doesn't do the gestures. 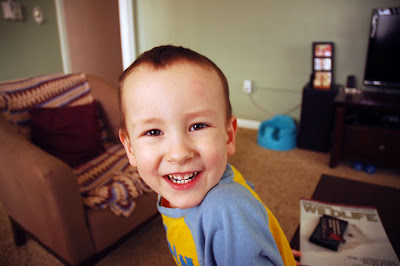 This is a very formative time for him and for me as a parent. Right now Andrew and I are laying a foundation, whether we acknowledge it or not, that will support John as he grows in maturity. I have bad parenting days for sure and I try to read books that will inspire me to be better. And when I have even a moment to reflect on the whole situation, I realize that John will be a man someday. Obvious, I know, but I think it's easy to forget when you're in the trenches of parenting. Right now, I have two boys in my house who will be grown men in a relatively short time, who have specific vocations, who will impact the world, who may have children of their own someday, and who have eternal souls that have been entrusted to my care. I forget all that when faced with a blowout or a yelling child.
Posted by Lindsey at 3:28 PM