Guess who got promoted?

Peter has been promoted to the highchair! He's pretty happy about it. Until now, his use to lay in a bouncy chair next to us while we ate our meals.  Now he gets to sit in the highchair and play with spoons.

I was going to hold off on giving him food until he was officially six months old, but he seems very interested in it. So yesterday I decided to try giving him an egg yolk mixed with some mommy milk (pictures to come!). He seemed to like it - BUT, his tummy was not so happy about it a couple of hours later. We were at mass and he was being pretty fussy. Sure enough, we were in the vestibule and right after the consecration, he looked up at me and started spewing all over. He got covered in it... I got covered in it. What a big stinky mess! Then he got really sleepy and took a three-hour nap when we came home. I was a little worried about him but he seems to be totally fine now.

I think I'll stick to my original plan and wait a few more weeks! =)

Other big news is he started rolling over from tummy to back yesterday. I guess it was a big day for our little man! 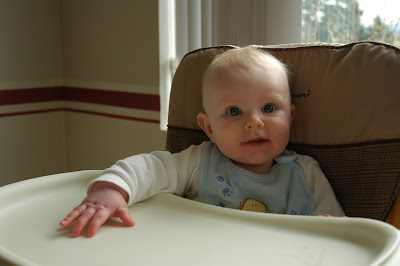 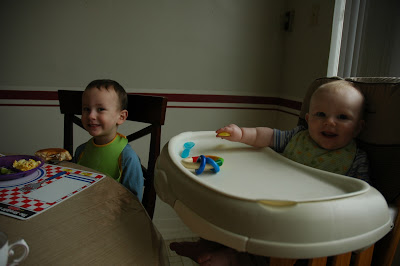