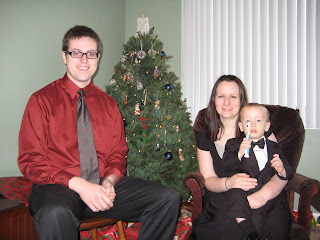 Christmas morning was pretty magical. It was neat seeing John's excitement, though he definitely was not expecting all the gifts and treats. We got up early and went to the 8:15am Mass. We had to wake John up because he usually sleeps in until 9am (I know, I am one lucky mama!). The first video below is of John after we got him dressed for Mass. He wasn't sure what to make of all the presents under the tree.

After Mass we opened our gifts to each other and then went upstairs to be with my parents, brother, and grandpa. One of the best moments of the day was when we walked into my parent's house. Andrew and I were greeting my brother and mom, but John ran past us. He made a mad dash for the tree and fell half way there, only to quickly rise to his feet to continue his sprint. We thought he was just excited to see more presents, but he had his eye on a gift that was not wrapped. My parents got him a Strider bike! He grabbed the bike and swung his leg over the seat - as if he's known how to ride a bike his whole life. It was the cutest thing! His raw joy and excitement was contagious to all of us.

We all opened gifts to each other, ate yummy food, and played games together. Christmas was very special this year because we had an honored guest with us - my grandpa. He lives in Oregon, so I do not get to see him much. It was quite a treat to celebrate with him. He is known for his ability to recite long poems from memory, so listening to his recitations added to the perfection of our Christmas day this year. 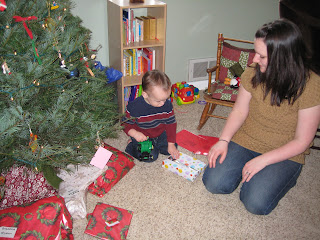 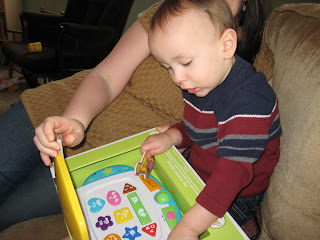 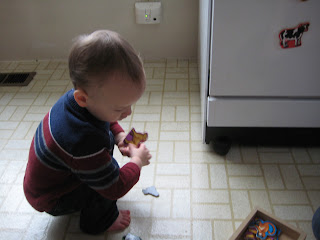 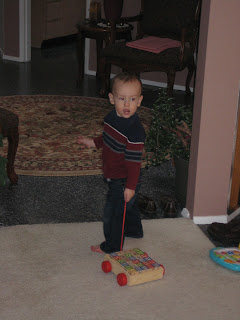