New Years Eve was crazy this year! I was on call with a friend who was due to deliver her baby any day. She has four other children all under five and she needed someone to watch them when the time came. Well, the time came on New Years Eve. I was able to rush out the grocery store and stock up on some food for the weekend. We were also expecting Andrew's parents to arrive that day for a post-Christmas visit. His parents arrived before I went to pick up the kids, so I was able to leave John with them. I came back driving a 15 passenger van; which, by the way, was a small victory for me - I was very nervous about driving something that big, but it really wasn't that bad! The whole evening and the next morning are kind of a blur so I am going to have to organize my memories in bullet points:
I was very happy to watch the kids and help out my friend. Her children behaved amazingly, so nothing really went wrong. It was just a big adjustment for me to have five kiddos in tow.

Mom and Dad St.Hilaire were able to stay until Monday morning, so we enjoyed some quality time with them. We played games, watched a movie, and ate good food - including my first attempt at homemade ice cream! They came bearing many gifts and we loved them all. We put them all out under the tree and on Sunday we had a second "Christmas morning." One gift that we were honored to receive was a picture that belonged to Grandma Reilly (Andrew's Mom's Mom). Mom said that she thinks it originally belonged to Grandma Reilly's mother. So this is a family heirloom! It was given to us by our cousin Erin, who was very generous in letting us enjoy it in our home. 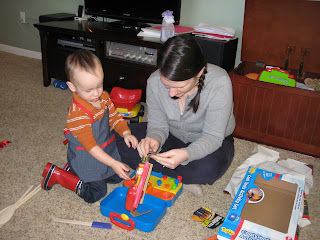 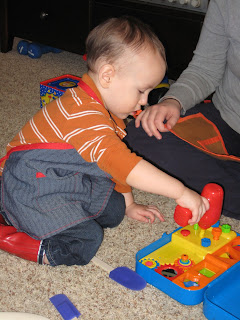 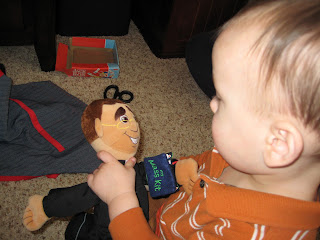 We always love visits with Mom and Dad. Saying goodbye is the hard part!
Posted by Lindsey at 3:20 PM