(Note: I began writing this post about a week ago, but I haven't had a chance to finish it until now... life is definitely busier with a mobile child!!) 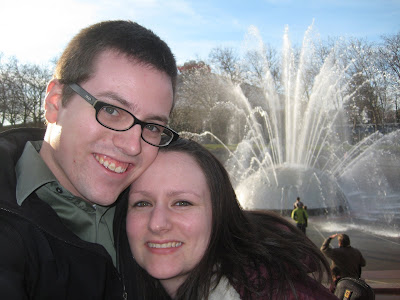 Last week, I ruined Andrew's surprise for my birthday. I was checking our bank statement (I learned this is something you shouldn't do during December...) and saw "PNW Ballet." What is that? I wondered. At first I was thinking "ballot" and wondering why we were being charged for voting, but then I realized that it was actually "Ballet." Then the acronym "PNW" all made sense - "Pacific North West." Andrew got me tickets to the Nutcracker!! I felt terrible for finding out. I wasn't sure if it would be better to act surprised or tell him the truth. I ended up telling him that I found out. He wasn't too upset and appreciated my honesty.

The big day was on Christmas Eve. It was all arranged that my parents would watch John all day while we were in Seattle. I was really looking forward to having quality time with Andrew. We got all gussied up for the show, said good bye to John, and headed for the 10:15 ferry. We arrived at the ferry at 10:00am - plenty of time to spare. And boy did we need spare time because as we were sitting in line, Andrew felt his jacket pocket and said "I forgot the tickets!"

"You're joking," I snickered.

"No, I'm serious, I forgot the tickets!" His face was deadpan.

Oh no! What were we going to do?? We acted quickly and called my dad. I stumbled over my words trying to quickly explain that we forgot the tickets and where he could find them. So my dad grabbed the tickets, rushed out of the house, and was speeding on his way to meet us at the ferry. Meanwhile, Andrew ran up to the ticket booth and called Dad again to tell him to meet him there. While Andrew was gone, they started to load the ferry. I pulled over to the side of the lane so cars could go around me; I didn't want to get on the boat in case my dad came too late. The ferry worker who was motioning the cars on was perplexed so I shouted to her "I'm waiting for my husband!" Then I saw her talking on her radio and she stopped looking at me; I assumed someone told her what was going on.

I kept glancing back to see if Andrew was coming. Sure enough, in a few minutes I saw him sprinting down the ferry lane! He hopped in the car, gasping for breath, and we drove on the boat! We had a long laugh and couldn't believe what had just happened! Oh man, imagine if he had remembered after we were on the boat! It was crazy!

Fortunately, that was the craziest part of the day. The rest went like a beautiful dream!

The Nutcracker was wonderful! Andrew and I both really enjoyed the dancing, sets, and beautiful music. Before it began, I asked Andrew if he had plans for food for us. He said no. I suggested that we go to the Center House and get a bite to eat there after the show. So after the Nutcracker, we moseyed on over to the Center House in search of food. Not much was calling to us, so Andrew spontaneously suggested that we go up in the Space Needle. I asked him if he had this planned, which he quickly denied. I felt like he was going to propose to me! ;)

We passed by the long line to go up, which kept me thinking that this was indeed planned. Sure enough, he went up to the reception counter for the Space Needle restaurant and said "I have a reservation for two, under St.Hilaire." What a rascal! =) 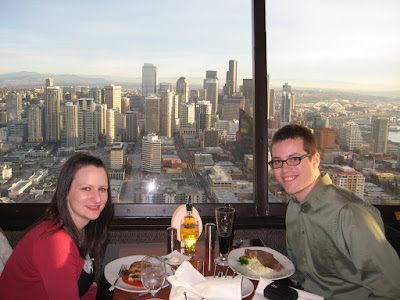 When we got up to the restaurant, Andrew told me to order whatever I wanted. I had never been to this restaurant before and was shocked by the prices. I was concerned that we could not afford to order "whatever we wanted." After letting me stew about this for a while, Andrew pulled out a piece of paper and handed it to me. It was from my brother. He wanted to treat us to lunch!! I couldn't believe it! I felt SO loved: My parents were watching John, Andrew took me to the Nutcracker, and my brother treated us to lunch in the Space Needle!! 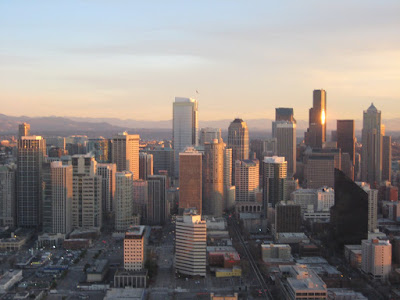 Andrew and I had a lot of fun pretending we were wealthy while we enjoyed the amazing view! At the end of the dinner, our waiter (named Fabio!) asked us if we wanted him to call our valet. That was a first! Andrew and I smiled at each other while politely turning down the offer, assuring him it wasn't necessary.
Then we went up to the top to enjoy the view a little more. 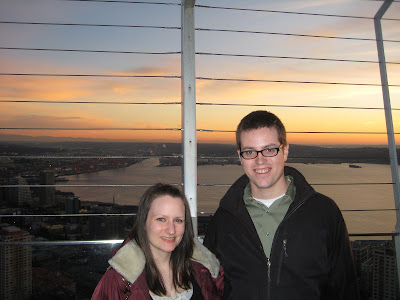 What a great day! =) I think every mommy needs a day like that! Thank you, dear family! 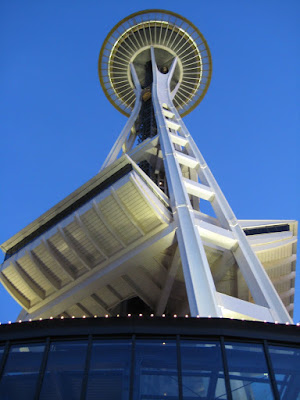