Last week, I cleaned out our closet (I wish I had taken a before picture - it was SO bad!!) because I was having guests over who wanted to use the crib for their baby's naps. The crib was buried deep under piles of clothes, stuffed animals, boxes, and other random items.

That night, since it was all cleaned out, Andrew and I thought we would try putting John in the crib again. He has been on a twin mattress on the floor by my side of the bed - and that was working, kind of... But John still relied on us to lay with him until he fell asleep or else he would just get up and crawl away. Andrew and I were tired of spending up to an hour each night coaxing him to sleep. Also, he usually ended up in our bed at some point during the night anyway.

Here, Here, Here, and Here are just a few of the posts I have written about getting John to go to sleep. Needless to say, it has been a long journey; which I am sure is not over, but the point we are at now is pretty good!

Since he took so well to the crib, I've been working on decorating our closet to look more like a bedroom. I want it to be a happy place that he will like to sleep and play in! Here is what it looks like so far: 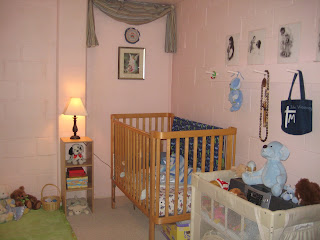 Again, I wish I had a before picture because this is a huge transformation! The best part of this room makeover is... I have spent no money! I decorated it with things that we already had around the house.
Posted by Lindsey at 11:34 AM