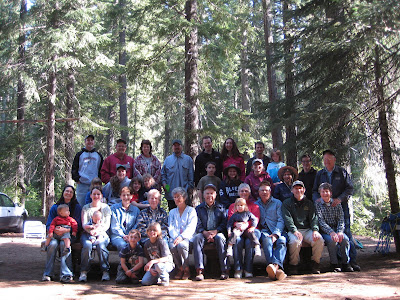 Huckleberry Picking
In the middle of August we went on our annual St.Hilaire huckleberry picking trip. Last year we went at the tail end of our honeymoon. Not many people went huckleberry picking last year because they had just traveled a lot so they could attend our wedding. This year it was a lot different; there was a really great turn out!

Last year the misquitoes were terrible! I remember when we arrived and the car came to a halt, the misquitoes began tapping on our windows, inviting us to come out! This year the misquitoes were not so bad, but the wasps were everywhere! They were all over our food and it was difficult to cook. So Andrew made a wasp trap (designed after one that his cousin made). It consists of tying a hot dog to a tree with some string and dangling it over a bowl that has water and a little bit of oil or liquid soap. It worked pretty well, and was interesting to watch. 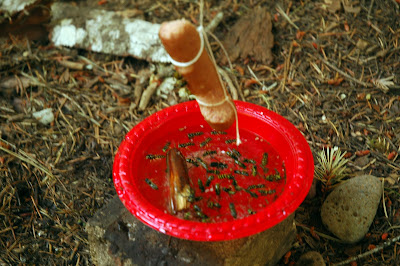 Getting together with this big group was so wonderful! We love the huckleberries... but we love our family more! Each night we prayed the Rosary around the campfire - well, John and I weren't around the campfire; we were nursing in the tent. On the second night, after the rosary, they all began singing. It was beautiful. From inside our cozy tent, I cuddled with John and we listened to our family sing! 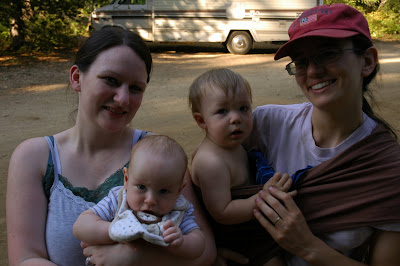 I also had a great time connecting with some cousins. Peggy and I had fun talking about mothering, cloth diapering, and incorporating the faith in our households. Angele and I discussed the best parts of being married. John did some bonding with his older 2nd cousin Paul.

Picking was difficult this year with John. Andrew had to do most of the picking. I look forward to when John will be more helpful with important matters - like picking precious huckleberries! So this year we came away with 5 "pies worth" (thanks to a generous donation from Mom and Dad St.Hilaire!). Not too shabby, but we will need to ration the pies out a little more this year. 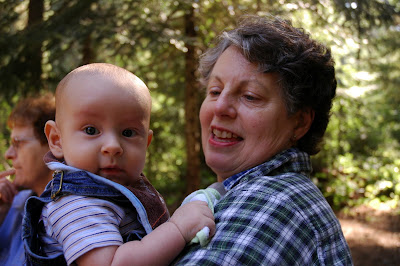 After berry picking, we headed out to my parents beach house in Newport. We were in the company of my parents, Andrew's parents, my brother, my grandpa, and my cousin, Beau. We had a full house! Some highlights of our time in Newport include: Eating tons of salt water taffy and chocolate, going on a beach walk, dipping John's feet in the ocean, playing Boggle and Forty-two, eating huckleberry pie made by Mom St.Hilaire (yum!), watching the sea lions, and spending quality time with our dear ones! 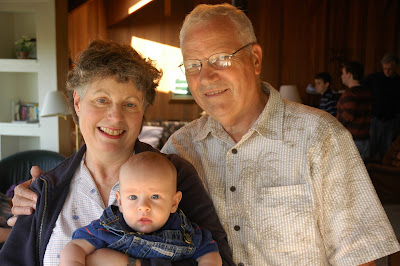 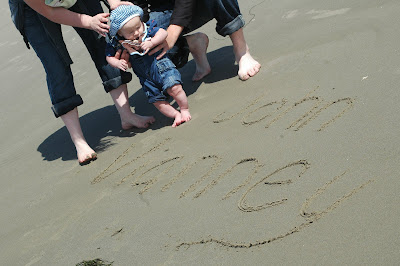 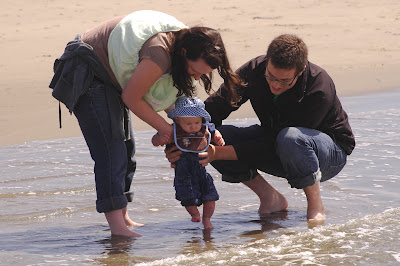 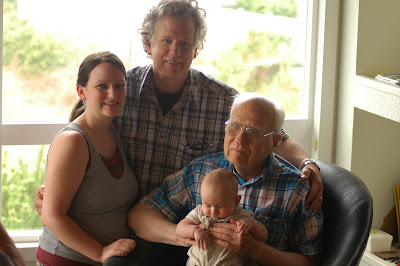 Salem
Then we moseyed on over to Salem, Oregon, to see our friends the Hardwicks! While we were there we went to a protest with a bunch of people at the court house (I think). John reached out and grabbed the sign I was holding... so he is already defending life in the womb and he is only 3 1/2 months old! 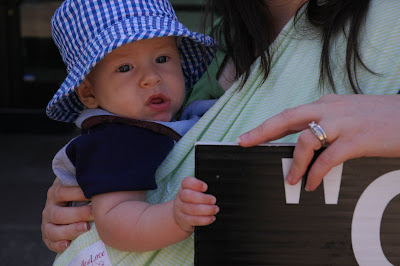 We spent the night with the Hardwicks before driving back home. It was really great to see them and their home. They have five beautiful children who are very obedient and respectful. It is good for Andrew and me to be around more seasoned parents, so we can learn from their good examples. 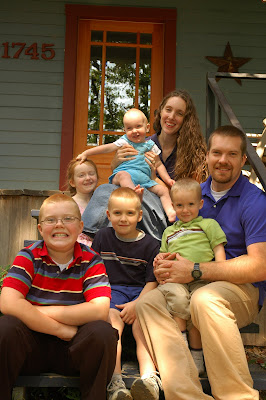 In the car I read the Duggar's book, it was really interesting and inspiring. They are the family on TV that has a show about their big family (19 kids!). It was neat reading about how they manage their home with so many children. After reading that book, I have a new idea of what constitutes a "large" family. The Hardwicks have been reading this same book and applying some of the strategies that the Duggars use. Through it all, I realized that we need to really train John in obedience because he will set the standard for our other children.
Posted by Lindsey at 9:26 AM